As a mathematics teacher in Woburn, Massachusetts, in the mid-1970s, Al Cuoco began developing and using problem sets for a high school linear algebra course. The problem sets, which investigated a range of mathematics at the intersection of algebra and geometry, proved to be an effective way to help students grapple with the mathematical concepts he was trying to teach. And every year, Cuoco and his colleague Elfreda Kallock grew and refined the collection. 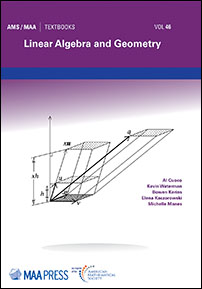 Now, decades later, these problem sets form the core of Linear Algebra and Geometry, a new curriculum developed by EDC, published by the American Mathematical Society, and written by Cuoco, along with EDC colleagues Kevin Waterman, Bowen Kerins, and Elena Kaczorowski and Michelle Manes, a mathematician at the University of Hawaii. Funding was provided by the National Science Foundation.

Cuoco—who has been a mathematics educator at EDC since 1993—says the program is intended for use in high schools that offer linear algebra as a mathematics elective course, as well as in undergraduate programs for pre-service mathematics teachers. And he believes this new curriculum stands out because of its approach. While other linear algebra curricula usually start with theorems and proofs and then provide illustrative examples, Linear Algebra and Geometry asks students to extract the general principles from orchestrated numerical experiments.

“We make the theorems and proofs the capstones, not the foundation,” he says. “And linear algebra is ideal for this, because general results can emerge from careful analysis of concrete numerical calculations.”

As with other mathematics curricula developed by EDC, Linear Algebra and Geometry focuses on the development of students’ mathematical habits of mind—that is, the thinking skills mathematicians use in their work.

“Integrating habits of mind was essential,” says Cuoco. “Abstraction and experimentation are at the heart of this whole course.”

More than 20 mathematics teachers assisted in the field testing of the materials between 2010 and 2012. And with some schools planning on adopting the curriculum this fall, Cuoco reports that Linear Algebra and Geometry is already receiving praise.

“Teachers have told me that they wished they had learned linear algebra this way,” Cuoco says.