EDC’s Alisha Keirstead offers advice on how to address sexual and gender-based violence.

Around the world, sexual and gender-based violence (SGBV) compromises the health, safety, and well-being of millions of women, men, and children each year. According to one UN estimate, 35 percent of women worldwide have been the victim of sexual violence in their lifetime. This kind of violence—which includes rape, sexual assault, and forced marriage—disproportionately affects women and children and has long-lasting ramifications. 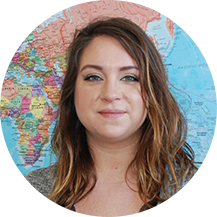 EDC’s Alisha Keirstead is working to build communities that can both prevent and better respond to instances of SGBV. She talks about her experiences in the Democratic Republic of Congo (DRC), a country trying to find peace and prosperity after years of conflict.

Q: How big of a problem is sexual and gender-based violence in the DRC?

Keirstead: SGBV is an issue that cuts across all socioeconomic levels, educational levels, religions, and ethnicities. Ongoing insecurity and population displacement, which breaks down established family and community structures that protect against violence, further place women and children at risk of harm.

The DRC has faced alarming levels of sexual and gender-based violence over the past several decades. From January to September 2014 alone, the U.N. Population Fund reported 11,769 cases of SGBV in the DRC’s North Kivu, South Kivu, Orientale, Katanga and Maniema provinces. Thirty-nine percent of these cases were directly related to the dynamics of conflict, perpetrated by armed individuals.

The Congolese government has taken steps to stop SGBV, including a 2006 policy that officially outlaws it. However, there is neither a culture nor a system of reporting cases of rape or sexual abuse. Historically, legal and judicial structures have not been effective in prosecuting SGBV cases and maintaining confidentiality, and survivors fear stigma, retribution, and other consequences for speaking out. After a rape, women and girls may be abandoned by husbands or families and be viewed as unsuitable for marriage due to their abuse.

Q: What is the lasting effect of SGBV?

Keirstead: The overarching trend we see among SGBV survivors is one of hopelessness. Many women and girls we work with take things like spousal violence or marital rape as a given because it is so prevalent in their communities. Feelings of being powerless and vulnerable to stop violence from happening, while living in a constant state of fear and anxiety, greatly impedes an individual’s ability to thrive. These feelings compromise social relationships, community involvement, and victims’ hopes for the future.

In the DRC, this is complicated by the fact that SGBV-based trauma is rarely addressed adequately. Many people do not report incidents of SGBV because the subject is taboo—they fear being ostracized or stigmatized. They do not trust legal and judicial structures to treat them fairly or bring about justice. When they do report incidences, there are few support structures able to provide the psychosocial support that can lead to coping and healing.

Q: What is the connection between economic vulnerability and SGBV?

Keirstead: For men, unemployment—or simply the lack of a livelihood—can be a trigger for violence. We see violence among men in reaction to their feelings of being economically powerless.

Women who lack financial resources and social support are more likely to become victims of SGBV. A key strategy for countering SGBV is to create opportunities for women and girls to earn income, secure employment, learn money management skills, and generate savings. These also provide women with a vital safety net if they become victims of violence.

Q: How are you working to reduce SGBV in the DRC?

Keirstead: In addition to messages that violence is not normal or acceptable, we try to foster discussions about the ways in which traditional ideas of male and female identities restrict and harm both genders. We talk about how men and women behave and interact, and also about how decisions are made in the household. Putting adults on a more respectful, cooperative playing field and giving women an equal stake in the home and community can help to reduce conflict between genders.

That’s a big part of what EDC is doing through the ELIKIA project: With our partner Catholic Relief Services, we help more than 8,600 parents and caregivers to improve their parenting skills, with a special focus on positive and non-violent discipline. We also implement activities that jointly engage both men and women to strengthen couples’ communication skills, improve cooperative decision making, and directly address attitudes toward SGBV.

ELIKIA is assisting parents to address SGBV with their children, to prevent violence in the home, and to teach their children that SGBV is not acceptable. We also support parents in having critical conversations with their teens and pre-teens so they can grow into young adults with the skills and understanding for healthy relationships and safe, consensual sex. Empowering daughters—and teaching all children positive attitudes toward gender roles and norms—is vital to bringing safety and gender equality to the DRC.