In Rwanda, youth with disabilities are overcoming obstacles to employment.

“I started to see my inner potential—that I could have a better life," says Christian Bayisenge.

Christian Bayisenge knows that there will always be a market for well-made shoes. So while he is currently just an apprentice at a small shoemaking workshop in Rwanda, Bayisenge is slowly saving the money he needs to strike out on his own.

“My dream is that my factory will be well known,” he says. “I want one day for people to say, ‘We are going to Christian’s place.’”

Only a few years ago, Bayisenge could not have imagined this potential career path. Partially paralyzed since the age of 13, Bayisenge eventually dropped out of school and was unable to find work because of the significant discrimination facing young Rwandans with disabilities. He was unsure about what the future would bring.

“The hardest thing since I developed this disability is that people started to look at me and think that I wasn’t capable,” he says. “It was like they thought I no longer was smart or could think just because I had a physical disability. In their minds, having a disability stopped me from being able to do anything.”

Things started to change for Bayisenge when he enrolled in EDC’s USAID-funded Huguka Dukore program. As part of its mission to promote social inclusion, Huguka Dukore actively identifies and recruits youth with disabilities to participate in its workforce development trainings and then provides them with links to the formal economy. 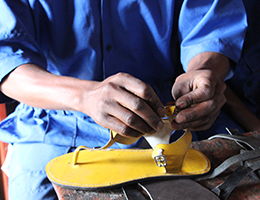 Through Huguka Dukore classes, Bayisenge learned the technical skills he needed to apprentice as a shoemaker. He also gained the financial knowledge to manage his money, and now he’s participating in a local savings and investment club. And he says that being in class with peers from all different backgrounds restored his confidence that he could be a productive member of society.

“I started to see my inner potential—that I could have a better life regardless of my disability,” he says. “I no longer see my disability as a barrier to reaching my goals.”

Changing attitudes about what youth with disabilities can or cannot do is a vital part of the effort, says EDC’s Tim Haskell.

“We’ve consciously taken a more inclusive approach to workforce development to counter the idea that youth with disabilities can’t contribute,” says Haskell, who directs Huguka Dukore. ”We emphasize looking at people for the value and skills that they bring, and for how they can contribute, regardless of their life situation.”

Daniel Ndayisaba is the master shoemaker at the shop where Bayisenge now works. Pacifique Iradukunda and Jean Paul Turishimye, two other apprentices from Huguka Dukore, also work there. Ndayisaba admits to feeling apprehensive when he first learned that three of his new apprentices had physical disabilities.

But his attitude changed when he saw that all three apprentices were well trained. In Huguka Dukore, they had learned basic shoemaking techniques as well as the workplace skills that would allow them to be successful apprentices. Seeing the value that each of them offered to his business, Ndayisaba was no longer concerned about the specific things that his new apprentices could or could not do.

“I felt like maybe this was a chance to help those who don’t have many opportunities,” he says. “Now I feel passionate about working with [these apprentices]. I want to support them in succeeding in this trade no matter what it costs.”