Policymakers and practitioners talk about the state of early learning—and the promise for change.

High-quality preschool programs help prepare children for kindergarten and beyond, yielding positive results for both families and society. But despite the long-term benefits, public preschool options, such as Head Start or subsidized child care, remain out of reach for many low-income families because of limited space in these programs.

The upshot? Too many at-risk children miss out on rich preschool programs that could give them a critical step up. 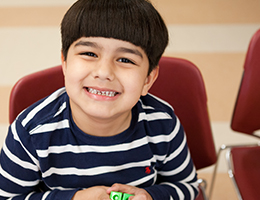 “Early childhood is a time of wonder, exploration, and learning,” says Patricia Fahey, director of Early Learning and Development at EDC. “Every child deserves an early education experience to help them learn the habits and skills they need to succeed in school and in life.”

Recently, over 100 early childhood practitioners, advocates, and policymakers came together for “Early Childhood—What’s Next? New England Discusses the State of Early Learning” to discuss how to improve the quality of, and access to, early education. The EDC-hosted event featured forums with policymakers and advocacy groups, as well as breakout sessions with EDC researchers and educators.

But access to public preschool, especially for low-income families, remains a concern, said David Wilkinson, commissioner of Connecticut’s Office of Early Childhood. During a panel discussion with Ken Wagner, the Rhode Island commissioner of elementary and secondary education, and Tom Weber, commissioner of the Massachusetts Department of Early Education and Care, Wilkinson addressed the challenges of bringing together the multiple health, educational, and social services available to support low-income families.

“We know that low-income and challenged families are navigating fragmented systems,” said Wilkinson. “It can be a full-time job to navigate the systems and get the services to which you have a right.”

This matters, said Wilkinson, because children who grow up in poverty are less likely to be ready for kindergarten and more likely to be suspended during their time in school than children who do not grow up in poverty. However, studies have shown that high-quality preschool programs can close that gap. Coordination of services—such as integrating preschool, afterschool care, and basic health services into one central location—also yields improvements in child well-being.

“All the data and science tell us that early childhood is our best chance to interrupt the intergenerational cycle of poverty,” said Wilkinson.

The conference also highlighted some promising models of early childhood education and care.

One emerging practice is the use of prenatal through grade 3 (P-3) approaches, which provide children with a smooth transition from preschool through the first three years of elementary school. This approach differs from the typical model of early childhood care, where preschool providers are disconnected from the elementary schools into which their children eventually matriculate.

“The idea behind P-3 is, can we string together a number of really good, high-quality years?” asks EDC’s David Jacobson.

During a breakout session about the potential impact of P-3 systems, Jacobson pointed to emerging models of early education and care in Cincinnati, Omaha, and Multnomah County, Oregon—communities that are creating partnerships to improve early childhood and early elementary education while supporting children and families with wraparound health and social services.

The early results have been encouraging, he said, and these communities are deepening and expanding their efforts.

“These early learning partnerships are the single most effective strategy we have to raise the achievement of low-income children,” said Jacobson.

Conference attendee Allison Comport, an early learning specialist with the Rhode Island Department of Education (RIDE), thinks a lot about access. This year, Rhode Island offered just over 1,000 spots in public preschool programs—but it was not enough.

“Availability of preschool spots is always an issue,” said Comport.

Part of increasing access is making sure that the most marginalized families know about and are able to enroll in public preschool, and Comport believes that Rhode Island has been successful in those efforts. She cites RIDE’s efforts to work with community organizations and faith-based groups that serve the state’s Latino and Southeast Asian immigrant families, many of whom are unaware that any public preschool options are available.

Comport also said that RIDE works with education liaisons for the state’s homeless community and the state agency in charge of foster child placement to ensure that all eligible children have access to preschool.

Regarding the Early Childhood conference, Comport saw it as a valuable experience because it sparked conversations among her colleagues about how they can continue to improve services.

“It was useful to hear what other communities are doing,” she said.