One in nine mothers in the United States experiences postpartum depression. You can find more information about the symptoms, as well as how to find support, on the Centers for Disease Control and Prevention website.

For years, Heather Johnson knew that many new mothers enrolled in Alabama’s home visiting program struggled with postpartum depression. She had seen it with her own eyes during her time as a home visitor. And when she became director of Continuous Quality Improvement at the University of Alabama-Birmingham School of Public Health, she continued to hear home visitors talk about the challenges that mothers were facing.

“Home visitors said that they worked with lots of mothers who were struggling with depression, but that they didn’t have the training and skills to help them,” says Johnson. “It was really frustrating for them.”

Data gathered by home visitors confirmed these anecdotes: 40 percent of mothers screened positive for symptoms of postpartum depression. But helping them? That was much more difficult, especially in a rural state with few mental health providers. 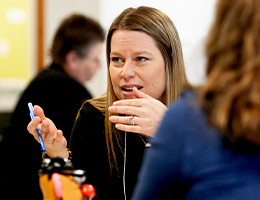 So in 2018, Johnson—as well as colleagues from the UAB School of Public Health and the Alabama Department of Early Childhood Education, which funds evidence-based home visiting programs across the state—joined the Home Visiting Collaborative Improvement and Innovation Network (HV CoIIN) to improve their state’s public health response to maternal depression. Through a cooperative agreement with EDC, the Health Resources and Services Administration has implemented CoIINs to improve processes and outcomes for children and families within the Maternal, Infant, and Early Childhood Home Visiting Program since 2013.

Johnson says that participating in the HV CoIIN allowed her team to hear from national experts on maternal depression, which helped them identify ways they could improve services. It also connected them with free access to tested resources and programs, such as Mothers and Babies, an evidence-based intervention for postpartum depression. Johnson says she was able to offer this training to her staff and all of Alabama’s local implementing agencies—about 50 people in all.

"The services offered by HV CoIIN were invaluable,” says Johnson. “We would not have had the resources to access that training on our own.”

Since joining HV CoIIN, Johnson and her team have worked with local home visiting agencies to make substantial changes to home visitors’ practice. Now, home visitors screen mothers for depression after they give birth or after they enter the home visiting program for the first time. Home visitors also maintain a comprehensive list of community partners that offer mental health services and routinely follow up with mothers who have been referred to them. And thanks to the Mothers and Babies training, home visitors are now able to conduct quick interventions in the home to foster a stronger, healthier connection between a mother and her child.

Johnson heard about the impact of these changes at a recent community meeting, when a mother shared her story of experiencing—and eventually confronting—her depression. The mother admitted that she had hid the truth about her symptoms from her home visitor during a screening for maternal depression. But visit after visit, the home visitor continued to re-administer the screening, to offer referrals to mental health services, and to do activities designed to foster a connection between the mother and her newborn.

Finally, after a few weeks, the mother realized that she needed—and wanted—help.

“She called the home visitor, and told her, ‘I want you to come back over here, and I want you to do the screening again,’” says Johnson.

This time, the mother gave honest answers. And once she had opened up about her depression, the home visitor was able to help her access services.

“She said that she felt so much more capable of being the mom she wanted to be,” says Johnson.

“And that is incredible,” says Johnson. “It’s changed the way we approach this topic completely.”

One in nine mothers in the United States experiences postpartum depression. You can find more information about the symptoms, as well as how to find support, on the Centers for Disease Control and Prevention website.