EDC has lost an extraordinary advocate and advisor with the death of longtime trustee Charles Benton, 84, who passed away April 29 at his home in Evanston, Illinois, after battling cancer. 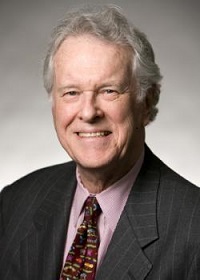 “Charles has been a tireless cheerleader for EDC for many years,” said Board Chair Marvin Suomi. “His curious mind and deep warmth and caring made him a wonderful colleague and friend. His strong interest in media education and the arts, as well as his championing the use of technology for learning, were hallmarks of his tenure on the board. He will be sorely missed.”

Benton served as an EDC trustee from 2001 to 2012 and was an emeritus member thereafter. He was the founder and chair of the Benton Foundation, which works to articulate a public interest vision for the digital age and to demonstrate the value of communications in solving social problems.

Benton had a long career in media education and entertainment leading organizations including Encyclopedia Britannica Education Corporation, Films Incorporated, Public Media, Inc., and Home Vision Entertainment. In 1978, President Carter appointed him chair of the National Commission on Libraries and Information Science and chair of the first White House Conference on Library and Information Services. In 1997, President Clinton appointed him a member of the Presidential Advisory Committee on the Public Interest Obligations of Digital Television Broadcasters. In 2012, he was appointed by President Obama to the National Museum and Library Services Board.

Throughout his career, Benton was an active board member and adviser for organizations in the arts, education, and communications. He held a degree from Yale University and did graduate work at the National College of Education and at Northwestern University.

Memorial services to celebrate Benton’s life will be held in Chicago this summer and in Washington, D.C., later this year.