Meet four women who are making a difference in their communities.

Young women attending a MYDev event in the Philippines.

On International Women’s Day (March 8), EDC celebrates women all around the world who are making life better for themselves, their families, and their communities. 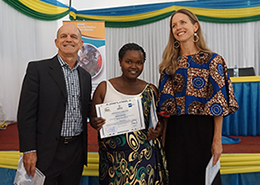 Jeanine Nirere was not about to let gender norms stop her from making a better life for herself. So although she had not been able to complete high school, when Jeanine had the chance to learn a trade through the USAID Huguka Dukore Akazi Kanoze program, she chose welding.

“I saw that no girls were signing up for welding, and I asked myself—if a boy can do this, why can’t I?” she says. “So I signed up.”

Jeanine is breaking down barriers by joining this traditionally male-dominated trade. Yet, it has been difficult at times, such as when some of her family members discouraged her from pursuing welding as a profession.

But she didn’t choose welding to make a statement. She loves the work, and she feels tremendous personal satisfaction in learning the trade and finding a job within the industry.

“It feels good to be working in a trade I am passionate about,” Jeanine says. 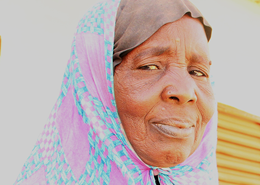 After an early forced marriage, Zeinabou Ousmane had to drop out of school when she was young. But now, at age 75, she is playing a critical role in making sure that young women in her community receive the education that she never had.

As a member of the Kadji community steering committee for the USAID Education Recovery Support Activity in Mali, Zeinabou helps groups of girls arrive at school safely by accompanying them on their journey from rural communities to their school. And when a teacher is absent, sometimes she will lead the interactive audio instruction lesson for the whole class.

A dedicated advocate for the rights of girls and young women, Zeinabou has also begun to speak to parents about the negative impacts of early marriage—and the need to get girls into local schools.

“I am doing for these children what I would have liked to have been done for me,” Zeinabou says. 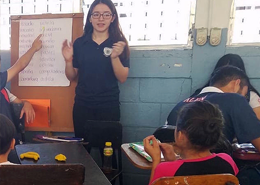 In Honduras, every high school student is required to complete 100 hours of community service before graduating. So every Saturday, 16-year old Valeri Jerezano tutors three children at a school in San Pedro Sula, Honduras, that is being supported by the USAID Honduras Reading Activity. As a tutor, Valeri reads to the children, helps them learn Spanish, and—perhaps most importantly—gives back to her community.

“At first I thought it was just a literacy project,” she says. “But this is so much more. I didn’t know reading books or teaching children to like books could be so fulfilling.”

Through volunteering, Valeri is helping to rebuild social cohesion in Honduras, which has long suffered political turmoil. And as she has spent more time with the children, she has appreciated how volunteering has given her a sense of pride in herself, the children she works with, and her country.

“It taught me the joy of solidarity and hope for a better country,” Valeri says. 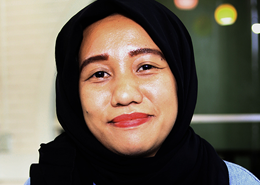 Inshera Asama, 27, was among hundreds of thousands of people who fled Marawi after violence erupted in May 2017. She recalls hearing gunfire and bombs as she left her village.

But Inshera, who participated in the USAID Mindanao Youth for Development (MYDev) program before she had to flee, decided to use her leadership skills to support relief and recovery efforts. She volunteered to assist in the distribution of relief goods to other displaced families, recruiting some of her MYDev peers to help. She also joined efforts to provide psychosocial interventions to Marawi’s youth affected by the conflict.

After peace returned, Inshera helped organize the distribution of USAID-donated books to schools and educational institutions. She also participated in events aimed at easing the suffering of war-affected children.

“I learned from this experience that peace is truly important,” Inshera says. “We come from different sectors and tribes, but we reached out to each other. It gives a lot of hope when you see people being united despite tremendous hardships.”