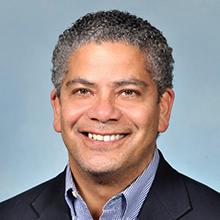 Andrés Henríquez, EDC director of STEM education strategy, is a national expert in science, educational technology, and policy. He brings extensive experience in philanthropy, having served as a program officer at the National Science Foundation and the Carnegie Corporation of New York.

Henríquez is deeply committed to making a difference in the lives of underserved children. For decades, he has worked to achieve this goal as an educator, researcher, advocate, and funder. He has led work in adolescent literacy and college and career ready standards and assessments, including the writing and adoption of the Next Generation Science Standards.

Most recently, Henríquez led a partnership between the New York Hall of Science, public schools, and first-generation Latinx families in Corona, Queens. Earlier in his career, he worked at EDC’s Center for Children and Technology, where he led a partnership between Bell Atlantic and Union City Schools that fueled a community transformation in Union City, New Jersey, and received national recognition from President Clinton.

Henríquez holds an MA from Teachers College and a BA from Hamilton College.