Seeds of Change for Rural Mali

Seeds of Change for Rural Mali

A Conversation with Bill Potter

“Returning to Mali is like coming home,” says Senior International Technical Advisor Bill Potter. After graduating from Columbia University Teachers College with a master’s in science education 25 years ago, Potter, a California native, volunteered for Peace Corps service in Mali.

“Mali is a special place for me,” says Potter.“ Despite it being one of the poorest countries in the world, the people have a proud culture. They’re incredibly hospitable and social. They have optimism. My experience there was profound.”

Before his return to Mali, Potter led EDC’s USAID-funded EQUIP3 education and youth project in the Philippines. “Working for EDC lets me work within new cultural contexts on a regular basis,” he says. “It’s a thought-provoking, challenging, adventuresome, and always changing work environment.”

After hours, Potter likes to listen to Mali’s “vibrant music” and socialize with friends he made during his first stay.

“I’m excited to return to work in Mali after beginning my international community development career here as a Peace Corps volunteer,” he says. “The opportunity to work with villagers and government officials to develop practical solutions that can improve the quality of life for families continues to be meaningful and worthwhile.”

How has Mali changed since you were first there in 1985? 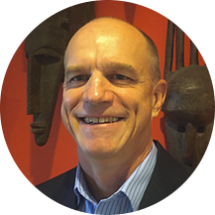 The population has almost doubled, from 7 million to 13 million people. The military dictatorship was overthrown by a coup in 1991. Now Mali is moving toward a multiparty democracy, which has opened things up. There are privately owned radio stations now as well as cell phones, which have had a huge impact on communications. Internet access is a mixed blessing: Youth see what’s out there in the world but also how far their country is behind in development.

Mali is still among the poorest countries in the world. It’s a mostly agrarian society with few exports. Gold and cotton are their main exports. Most of the people are subsistence farmers who struggle for food security. The government wants to give youth positive activities and options. Our project will focus on three regions in the south: Kayes, Koulikoro, and Sikasso, with possible expansion to Timbuktou in the north.

How will rural youth benefit from job skills training?

Many youth are migrating from the countryside to the cities to look for work. When they can’t find work, they are idle. When we talked to them in their villages, we found that they’d actually like to stay there. They told us, “This is our home. This is where our families are.” Youth want to earn, and given the opportunity, they want to achieve successful livelihoods in their home villages. They are entrepreneurial and able to identify what they need to reach their goals, which are predominantly in the agro-pastoral sector. So we decided that this new project should focus on rural youth.

What types of skills will the youth learn?

We’ll be focusing on income-generating activities linked to the agro-pastoral sector, such as improving agricultural farming techniques and food processing as well as pastoral activities, such as poultry farming, fish farming, and animal husbandry, and improved fodder management techniques.

We’ll be teaching them entrepreneurial skills so they can sell their produce at the village market. Others want to learn vocational trade skills, such as agricultural equipment repair, water management systems repair—for example, wells and pumps—metal welding, woodworking, tailoring, and vehicle repair. They’ve also said they wish they had basic literacy and numeracy skills, so we’ll also be prioritizing basic education.

How does EDC’s youth development work in other countries inform this project?

EDC is fortunate to have the experience of running many other youth projects—in 15 or so countries. We have developed curriculum materials, training programs, and systems that empower local organizations, communities, and governments to create sustainable change. A core strategy is to strengthen the organizations and systems already in place rather than start from scratch. That’s critical for long-term development and sustainability. In Mali, we’ll work with the youth associations found in most small villages, building their capacity to support the youth.

What are your goals for this project?

Our goal is to reach 10,000 youth across 200 villages in three regions of Mali. The youth want to earn income for their families and themselves. At the end of five years, we hope Malian youth are more educated, more economically productive, and empowered to build civically active lives for themselves and their communities.

The Mali Out-of-School Youth Project is funded by the U.S. Agency for International Development (USAID).