Five teams of finalists are competing for the chance to bring their innovative ideas to life.
“And the winner is…!”

Winners of the 2018 EDC Pitch Competition will be announced during the Anniversary Gala Dinner. Learn more.

At EDC’s Waltham headquarters, Tania Tzelnic and Ann Hershkowitz are pitching an idea they think could be a game-changer for young entrepreneurs: a mobile phone app that provides on-the-go training and support. 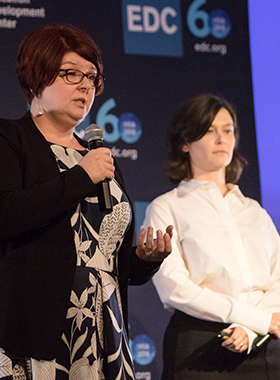 The app, which the team has dubbed market.able, would provide young entrepreneurs with tools they could use to identify and take advantage of market opportunities—such as video guides, interactive analysis tools, and crowdsourced maps—and could potentially reach millions of youth around the world. The team created a mock-up of the app and developed a plan for rolling it out worldwide.

The presentation is part of EDC’s Pitch Competition, an organization-wide event to foster what could become EDC’s next big idea in health, education, or workforce development. A panel of three judges—Dan Lothian, former CNN bureau chief, Boston; Mish Michaels, meteorologist; and Chris Colbert, MD, Harvard Innovation Lab—listened intently to the market.able presentation, followed by questions: How would young people find out about this app? How would market.able go to scale? And how is this tool different from other workforce development tools that already exist?

In all, 31 teams from across EDC submitted proposals in the Pitch Competition’s initial round. Now, it’s down to just five finalists. The winning team will be announced at EDC’s 60th Anniversary Gala on October 16 and will be awarded $50,000 in funding to support the development of their idea.

Sparking new ideas to persistent problems is exactly what Tina Choi, EDC’s senior vice president of external affairs, had in mind when she announced the Pitch Competition back in April.

“I wanted to celebrate EDC’s 60th anniversary with an event that was different for the organization and that showcased the enormous talent we have here,” Choi says. “This competition has really lit a spark under some teams.”

The five final teams are proposing a diverse group of innovations. They include a step-by-step planning guide for community-led disaster planning and response, as well as a toolkit to help educators support child victims of the opioid crisis. And in addition to market.able, two other mobile apps made the cut: Care(giver) Navigator helps parents navigate complex systems of care for children with disabilities, and PocketPD delivers on-demand professional development for early childhood educators.

“Being in the competition has provided an opportunity to delve into an idea and try to bring it to fruition,” says Tzelnic, who works on EDC’s workforce development initiatives around the world. “It’s also been a chance for us to be playful and creative without the usual constraints of grant funding. It’s been really exciting.”

Education researcher Megan Silander was part of the PocketPD pitch team. She says that participating in the competition helped her and her team refine and improve their pitch, and that she is committed to seeing out her idea—regardless of what happens on the 16th.

“We're going to take this idea somewhere, no matter the result of the competition,” she says.

Winners of the 2018 EDC Pitch Competition will be announced during the Anniversary Gala Dinner. Learn more.