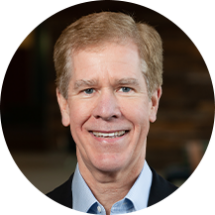 As president and chief executive officer (CEO), David Offensend brings a strong business acumen as well as nonprofit experience to his oversight of EDC’s domestic and international work. He leads the Leadership Team, which directs the organization’s major programmatic and business activities, and is a member of EDC’s board of trustees.

Most recently, David was the chief operating officer (COO) for America Achieves, a nonprofit organization that helps communities and states build high-quality educational systems and prepare young people for college and careers.

Previous to America Achieves, David served for 10 years as COO of the New York Public Library, the nation’s largest public library system with 90 affiliated branches. During his tenure, he was responsible for the digitization of the library system, increased circulation by 70 percent, and extended the reach and quality of the research and education programs.

Before moving to the nonprofit sector, David cofounded Evercore Partners, an independent investment banking advisory firm. He also worked in the investment organization of Robert M. Bass as well as at Lehman Brothers, where he was president and CEO of Lehman Brothers Merchant Banking Partnership.

David has served on multiple boards, including Princeton University, Bedford Stuyvesant Restoration Corporation, and Brooklyn Bridge Park Corporation. He holds a BA in public and international affairs from Princeton and an MA in business administration from the Harvard Business School, where he was a Baker Scholar.

Watch as EDC President David Offensend discusses how EDC is both improving literacy and strengthening communities in Honduras through the USAID-funded De Lectores a Líderes project (USAID Honduras Reading Activity).